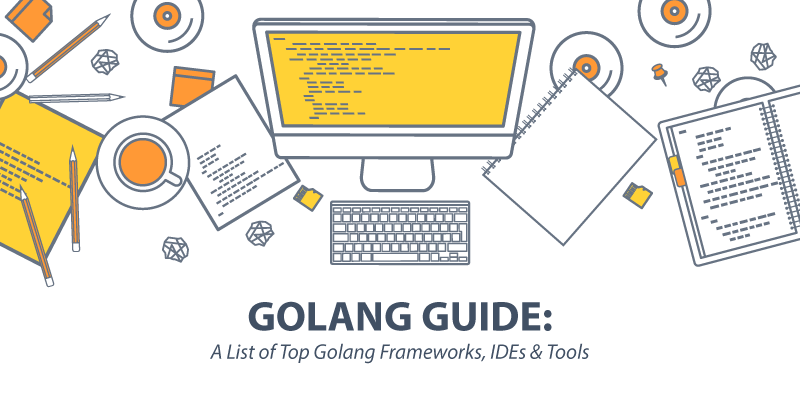 Since its introduction, Google’s Go Programming Language (Golang) has been experiencing an increasing popularity among mainstream users. In a December 2016 survey, 89% of the 3,595 respondents claimed that they program in Go at work or outside of work.

Additionally, Go ranks highest among the programming languages in terms of expertise and preference. This July 2017, Go ranks 10th in Tiobe’s Programming Language of the Year, jumping from its 55th ranking last year.

Clearly, Go is attracting many programmers from various disciplines and software development outsourcing professionals. And it’s safe to say that this is due to the ease of using Go.

As a compiled, open-source programming language, Go makes it easy for developers to build simple, reliable, and efficient software. It is the product of the innovation and evolution of the more conservative languages such as C and C++.

With Go, the amount of code typing is reduced and writing robust APIs without sacrificing its performance has become easier. Designed for scalability and concurrency, Go makes optimizations possible. A compiler can perform all the code inspection work before runtime.

We’ve compiled a list of the top frameworks, IDEs, and tools for Golang for your quick reference. Bookmark it on your browser so that you can come back whenever you’re working with Go!

Web frameworks help developers build applications as easily and quickly as possible. Go is still relatively new, so it’s important to use frameworks with sufficient documentation.

Here are 9 frameworks you can use to help you build projects using the Go Language.

As a high productivity framework for Go, Revel includes a Hot Code Reload tool that lets you rebuild your project on every file change. It also includes a wide variety of comprehensive and high-performance features, so you don’t need to find external libraries to integrate into the framework.

Beego is a full-fledged MVC framework with its own logging library, ORM, and web frameworks. You don’t need to find and install third-party libraries. It features a built-in tool called Bee Tool that watches out for code changes and runs tasks when changes are detected.

Beego will save you a lot of hours, especially in the beginning of a project when you’re figuring out the logging framework or application structure.

Inspired by Sinatra, Martini is an extremely light but powerful framework. It was developed for writing modular web applications and services in Golang.

It features a non-intrusive design that’s quick and easy to use and includes a wide range of handlers and middleware. It’s capable of performing basic routing, exception handling, and default document serving for AngularJS apps in HTML5 mode.

Martini’s best feature is its use of reflection, which lets developers dynamically insert data into the handler functions and add new services. Martini is also fully compatible with the http.HandlerFunc interface. The downside, though, is that the Martini framework is no longer maintained. 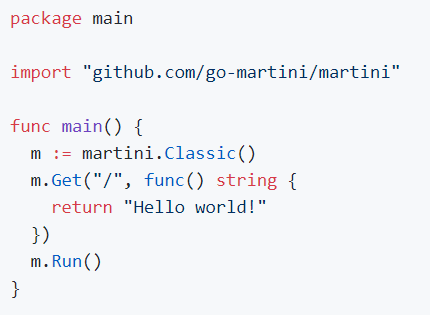 Gin Gonic is a web framework with a martini-like API, but with much better performance. If you’ve used Martini before, then you’ll be familiar with Gin Gonic. Otherwise, it will only take you 10 minutes to learn Gin. It’s that easy!

Gin Gonic is a minimalistic framework that includes only the most essential libraries and features. This makes it perfect for developing high-performance REST APIs. Plus, it’s 40 times faster than Martini.

Building new web applications with Go is quick and simple with Buffalo. When you’re starting a new project, Buffalo already has everything setup for you—from front-end to back-end development.

It features Hot Reloading, which means that dev command will watch your .go and .html files automatically. It will then rebuild and restart your binary for you. Just run the dev command, and you’ll see the changes go live right before your eyes!

Buffalo is more than just a framework – it’s a holistic web development eco-system that lets you get straight to building your application.

Goji is a lightweight and fast web framework that has composability and simplicity as its main priority. Much like net/http.ServeMux, Goji is a minimalistic HTTP request multiplexer. It includes Einhorn support, which makes it possible for you to have websocket support in Goji.

Additional features include URL patterns, re-configurable middleware stack, graceful shutdown, and more. Goji can be used in production and has served billions of requests across several organizations.

The downside to Tiger Tonic is its inadequacy when it comes to building large, back-end applications.

Another powerful yet minimalistic framework, Gocraft offers fast and scalable routing performance. It adds routing to the net/http package from the standard library.

Gocraft is a Go mux and middleware package that features casting and reflection capabilities so that you can type your code statically. You can also add an optional functionality with the built-in middleware or write your own.

Since performance is always one of the top concerns for developers, Gocraft is a great choice for developers. It’s very easy to write backend web applications using the Gocraft framework.

Although Mango is not actively maintained by its creator, Paul Bellamy, a lot of Go users still use it. The great thing about Mango is its modularity. You can choose from a variety of libraries to include in your project.

Mango lets you build reusable modules of HTTP functionality as quickly and easily as possible. It compiles a list of middleware and application into a single http server object to keep your code self-contained.

IDEs for Golang are gaining popularity, along with the Go Language. While many developers still prefer to use text editors, many prefer to use IDEs as well.

Here are the top IDEs that work great with Golang.

Software development company JetBrains released another reliable IDE, but this time, for Golang. Gogland is a commercial IDE that provides a robust ergonomic environment for Go developers. It also features coding assistance, debugger, and an integrated terminal.

Because an established company created Gogland, it has an extensive IntelliJ plugin ecosystem where you can get additional tools should you need more.

LiteIDE is among the first Golang-centric, open-source IDEs that was created more than 5 years ago. As a C++ Qt application with a unique look and feel, LiteIDE offers code management, configurable build commands, gdb and Delve debugger, auto-completion and theming with WordApi, MIME type based system, and more. It also provides JSON and Golang support.

Because Wide is created and maintained by a Chinese developer, most of its documentation and support are in Chinese.

If you’re already using Atom, your code editing experience in Golang can be improved with an open-source package called go-plus. With go-plus, you get instant, real-time feedback on your syntax and build errors.

The go-plus package offers almost all Golang support in Atom. It can also be used for tools, build flows, linters, vet and coverage tools.

Because Eclipse is a widely popular IDE, numerous plugins have been created for it. GoClipse is an Eclipse plugin for Golang that offers Go source code editing with configurable syntax highlighting and automatic indentation and brace completion.

GoClipse also serves as a project wizard and builder that reports syntax and build errors instantly. Additional features of GoClipse include debugging functionality and code assist.

Sublime Text is another sophisticated text editor with a large community of contributors and developers. As such, a wide variety of plugins has been created for this IDE.

GoSublime is a Golang plugin for Sublime Text 3 that offers code completion from Gocode, lint/syntax check while you’re wiring code, automatic addition and removal of package imports, and more.

Vim is a free, open-source IDE that can be customized and configured with various plugins. If you’re a Golang programmer, you can use Vim with the vim-go plugin created by Fatih Arslan. Vim-go automatically installs all the necessary binaries for providing a smooth Vim integration for Golang.

Vim-go is highly customizable, with individual features that can be enabled or disabled according to your need.

Komodo is a full-featured Go language IDE that supports other programming languages such as Node.js, Python, Ruby, Perl, and more. With this Go IDE, you can write clean code easily. Its features include an advanced code editor, intelligent code completion, syntax checking, version control and unit testing, and a Go Code Intelligence that allows code browsing and code hinting.

The great thing about Komodo is that it works great for team collaboration since multiple developers can edit a document simultaneously. Komodo can be installed on Mac, Windows, or Linux with just one license.

IntelliJ IDEA (same company as JetBrains) is an IDE that can be used with Golang through the Go language support plugin. If you want to use IntelliJ IDEA with Golang, you need to install this plugin, albeit with limited features as opposed to Gogland.

Golang tools can be used for a wide variety of projects and web applications. Developers can write code and build applications as quickly and easily as possible with these helpful tools.

Here’s a list of the top Golang tools for your reference.

With Apicompat, you can avoid false positives. However, not every backwards incompatible change can be detected by Apicompat. Swapping argument parameters and other changes still need to be considered by the library author.

Inspired by Java Checkstyle, Checkstyle for Golang prints out coding style suggestions. It also lets developers check file line/function and line/param number, which can then be configured by the user.

Depth is another useful Golang tool that helps web developers retrieve and visualize Go source code dependency trees. It can be used as a standalone command-line application or as a particular package within your own project. You can add customizations by simply setting the appropriate flags on the Tree before resolving.

This toolkit includes a wide variety of features and functions. Go-Swagger is an implementation of Swagger 2.0, and can serialize and deserialize swagger specifications. It’s a minimalist yet powerful representation of your RESTful API.

If you need to run Go lint tools and normalize their output concurrently, that’s exactly what Go Meta Linter can do for you. Go Meta Linter is intended to be used with a text editor or an IDE integration such as Sublime Linter plugin, Atom go-plus package, Emacs Flycheck checker, Vim/Neovim, and Go for Visual Studio Code. It also supports a wide variety of linters and configuration files like JSON.

Go-callvis is a web development tool that allows you to visualize the call graph of your Go program with Graphviz’s dot format. This tool is especially useful when building large projects with complex codebases. This is also useful when you want to understand another developer’s code structure or rebuild someone else’s project.

With go-callvis, developers can focus specific package within a program; group functions according to package and methods according to type; and limit packages to custom path prefixes, and ignore those that contain them.

Gonative is a simple Golang tool that lets you build Go toolchains with native libs, which can be cross-compiled while still utilizing the Cgo-enabled versions of the stdlib packages.

Gonative downloads the binary distributions for each platform and copies their libraries into its proper places. At the same time, Gonative sets the correct mod time to avoid unnecessary rebuilds.

Grapes will soon support full host key validation, so that’s something developers should watch out for.

The great thing about this Golang linter is that it focuses on simplifying Go source code. Gosimple always targets the latest Go version, so it requires Go version 1.6 or later.

If there’s a new Go release, gosimple will suggest the easiest and simplest methods to avoid complicated constructs.

If you’re coming from a JS/Node background, you need to learn some new programming concepts such as coroutines, channels, strict typing with compilation, interfaces, structs, pointers, and some other differences. But, once you get into the groove, you’ll find Golang easier and faster to use.

Passionate about building highly effective teams. Husband, father of 3, CEO & Founder of IntelligentBee, Costi is a classic-rock fan who is doing web development, in that order. He's spending his time helping his teams improving the internets by creating solutions that provide value to their customers.